St. Peters Richmond Anglican Church has provided Gospel ministry and has been pivotal in many key events in the lives of the residents of the Hawkesbury and elsewhere for over 175 years.

The site covering the Church, rectory, Sunday school and burial ground was originally surveyed in 1810 by a small team under the leadership of Governor Lachlan Macquarie. The current St. Peters Richmond Anglican Church and rectory buildings were designed by Mr Francis Clarke and were built by Mr James Atkinson. The Church was consecrated in 1841 by Bishop Broughton. The architectural style of the Church is “Colonial Georgian”, and the rectory is “Rustic Gothic”. Later additions and alterations to the Church and rectory were designed by Mr Edmund Blacket.

There are several plaques and stained glass windows in the Church which are relevant to pioneering families of the area as well as there being a memorial to the fallen servicemen of the Great War, a beautiful pipe organ, a mass of beautiful Australian cedar fixtures and an ambience that is truly Holy and restful.

The St. Peter’s burial ground (or cemetery) holds the remains of several first fleeters, pioneers and other prominent people from the early period of Hawkesbury settlement.

More information on the construction of the church can be found at  https://www.hawkesbury.org/name/st-peters-anglican-church-richmond

There is also a shorter Hawkesbury Gazette article:
http://www.hawkesburygazette.com.au/story/3709103/celebrate-st-peters-tapestried-past/

The following is an extract from an article posted on Hawkesbury Heritage and Happenings in 2016, found at  http://hawkesburyheritage.blogspot.com.au/2016/04/historic-st-peters-church-of-england.html 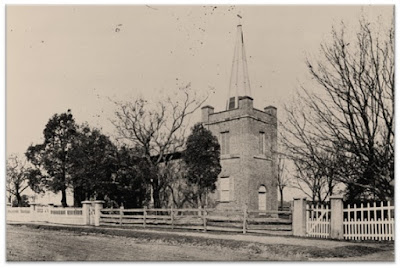 In 1789 Governor Arthur Phillip explored the area around Richmond Hill. Five years later, settlers were granted land and given permission to reside in the Hawkesbury. The first services were conducted in Richmond in 1808 by Brother Youl but regular services were not customary until after the appointment of the resident chaplain, Reverend Robert Cartwright to the Church of England in the Hawkesbury in 1810. He served both Windsor and Richmond until 1814 when the parishes separated.
Governor Lachlan Macquarie travelled to the Hawkesbury in 1810 and named the five towns of Richmond, Windsor, Wilberforce, Pitt Town and Castlereagh. In Richmond he selected the location “on a very beautiful elevated Bank and overlooking Pugh’s Lagoon and adjoining rich lowlands.” He visited again, about a month later, and recorded in his Journal in 1811:

…the scite(sic) of the church, schoolhouse and burying ground were marked out by strong posts…The name of the town, painted on a board and nailed to strong lofty post was put close to the beautiful bank immediately above and overlooking Pugh’s Lagoon and adjoining rich lowlands where it is intended to erect the Church at Richmond.

The Richmond church lands were consecrated by Rev Samuel Marsden in 1811 and in that same year, the decision to construct a brick building was made at a meeting.  The community went about raising the funds, over two hundred pounds, to do so, however the schoolhouse-come-chapel, was not constructed until several years later.
The two storeyed schoolhouse, similar to the one surviving at Wilberforce, was constructed next to the burial ground, measuring about 12 x 18 metres in size, and could seat up to one hundred people. It had accommodation on the ground floor with schoolroom upstairs which doubled as a chapel on Sundays. The first schoolmaster appointed to Richmond was Matthew Hughes and he taught at the school from 1813 until 1839. This was at a time when schooling was provided by the church, public education did not come about until much later in the nineteenth century.
As the town grew, it was evident a more substantial church building was required. A public meeting was held at the schoolhouse in 1835, headed by Rev Samuel Marsden. A Committee was formed, and a subscription list commenced where people could pledge donations. The church was designed by architect Francis Clarke (1801-1884) who was responsible for the design of several others churches including Mulgoa and Prospect. Tenders were advertised to construct the church in 1836 with local builder James Atkinson the successful builder. Construction of St. Peter’s church was underway by late 1837 and took several years to build. It opened on 15 July 1841.
It was reported that:

The new church, called St Peters was officially opened on Thursday and consecrated by [Bishop Broughton] the Lord Bishop of Australia, when all the responsible families in the town and neighbourhood were present. After the ceremony, a very large party of the gentry and clergy, with the Bishop, police magistrate, &c, were received at Hobartville, and entertained most hospitably by Mr. & Mrs. W. Cox. These meetings on such occasions do great good: they promote harmony, inspire confidence, and tend to unity; and it is a fair example of the really good feeling of the Australian community…

The rectory, also designed by Clarke, was not completed until 1847. It is supposed to be similar to an English parsonage in Farnham Surrey, where Bishop William Grant Broughton lived for a period. A number of changes were made by the well-known architect Edmund Blacket to the rectory in 1863. The nearby coach house and stables have also survived.
The church was originally lit by candle and then kerosene lamp. Shortly after the end of the First World War, the electricity was connected. In 1849 a barrel organ was installed followed by an American styled organ in 1877. This was replaced in 1904 with a pipe organ. There have been a number of changes to the church including the addition of a side-porch, designed by Edmund Blacket, the construction of a chancel and gallery, and reorganisation of the pew layout occurring during the 1850s. Coloured glass windows were introduced in the 1870s, and in 1891 the gates and iron railing were erected. Several remarkable stained glass windows also adorn the church. 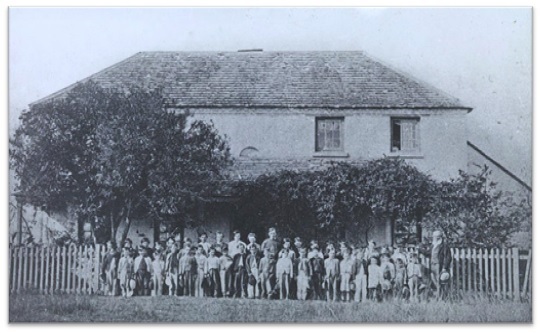 The old schoolhouse was used until about 1874 and a new Sunday School Hall was built next to the cemetery facing Windsor Street. [3] The schoolhouse was demolished sometime later and a number of the bricks were used to build an obelisk outside the church, commemorating the early pioneers of the church and unveiled in 1933.
During the twentieth century the church experienced several disasters. In 1933 a heavy hailstorm smashed over thirty panes of glass from the windows. A wild storm demolished most of the spire in 1956 and it was necessary for it to be replaced. In 1964 the original ceiling was significantly water damaged.

Burial entry for Margaret Catchpole who died in 1819 and is buried at St Peter’s.
Photo: M. Nichols

The earliest recorded death in St Peters burial ground is that of five year old George Rouse who drowned in 1809. As this was before the cemetery was officially marked out and consecrated it is not known if he was actually buried or just commemorated on the headstone.

There are a number of pioneers who came with the First Fleet in 1788 buried in the cemetery. Ex-convict Margaret Catchpole who arrived in 1801 and died in 1819 is also buried in the cemetery in an unmarked grave. William Cox junior and Andrew Town, both of Hobartville; Benjamin Richards who established the Riverstone Meatworks and botanist, Louisa Calvert nee Atkinson are some of the notable pioneers found in the cemetery.