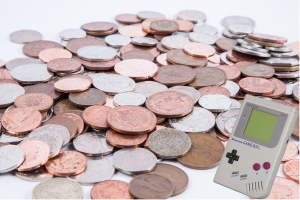 When I was a lot younger, around about kindergarten or year 1, I had a Gameboy Advance SP. Now this gaming device was a remarkable technological innovation. It had a backlight and… well that’s about it, but that was enough to make it the best portable gaming device around.

Any of you who have played one of these devices would know that the best games you could play were of course the Pokémon games. I was obsessed with my Pokémon game, Emerald if you’re in the know.

Like any obsession when you’re a small child I took my Gameboy everywhere with me. I would play it in the car on the way to school. Basically I’d walk around anywhere that wasn’t school with my face buried in its little 7.4cm screen (Yes that is about 2/3s the size of the iPhone 5 screen). So of course, when I went to swimming lessons one fateful day I took it with me, and when it was time to go swimming I left it on my seat.

Now I know what you’re thinking. “Oh no! Water and electronics! I can see where this is going.” But if your imagining some hilarious scenario where someone knocks my Gameboy into the pool you’d be wrong. In fact, my problem was entirely more sinister.

Due to my young age I had to be taken to swimming lessons by my mother. She of course had to bring my siblings, as they were still quite young as well. My brother thought to himself that he would enjoy playing my Gameboy whilst I was in the pool – and it’s not like I would notice, right? Wrong. The particular game I had been playing was Pokémon and, as any fan would know, Pokémon can only have one saved game at a time. My brother in his unfathomable ignorance saved over my game deleting hundreds and hundreds of hours of work and toil.

Let’s just say when I got out of the pool, and went to play my game, I was distraught. Something I had worked so hard to gain, something precious to me was taken in a moment and I couldn’t understand it. But my little mind could understand that it wasn’t my fault. There was someone who I could blame. I was angry. Frustrated. I wanted revenge.

Now the reason I told you guys that story about my life is because, as I’m telling you about it, you can probably think of similar situations in your life. Times where someone has wronged you and they deserve to be punished for what they’ve done. My example was quite trivial but I certainly have some more serious ones – and I’m sure you do too. Times when you’ve really been hurt by someone and they don’t seem to care. It’s very easy to want them to get what they deserve. What we think they deserve.

The passage that I want to share with you guys tonight is Matthew 18:21-35 and it starts with Peter asking Jesus how to deal with someone that has wronged him.

Peter asks Jesus; “Lord, how many times shall I forgive my brother when he sins against me?” ‘How many times?’.

Peter then quotes a figure at Jesus “perhaps maybe seven times?” Once they’ve wronged me 7 times then I can punish them? Then they will get what they deserve?

To answer his question Jesus tells Peter a story:

“Therefore, the kingdom of heaven is like a king who wanted to settle accounts with his servants. 24 As he began the settlement, a man who owed him ten thousand bags of gold[b] was brought to him. 25 Since he was not able to pay, the master ordered that he and his wife and his children and all that he had be sold to repay the debt.

26 “At this the servant fell on his knees before him. ‘Be patient with me,’ he begged, ‘and I will pay back everything.’ 27 The servant’s master took pity on him, cancelled the debt and let him go.

28 “But when that servant went out, he found one of his fellow servants who owed him a hundred silver coins.[c] He grabbed him and began to choke him. ‘Pay back what you owe me!’ he demanded.

29 “His fellow servant fell to his knees and begged him, ‘Be patient with me, and I will pay it back.’

30 “But he refused. Instead, he went off and had the man thrown into prison until he could pay the debt. 31 When the other servants saw what had happened, they were outraged and went and told their master everything that had happened.

32 “Then the master called the servant in. ‘You wicked servant,’ he said, ‘I cancelled all that debt of yours because you begged me to. 33 Shouldn’t you have had mercy on your fellow servant just as I had on you?’ 34 In anger his master handed him over to the jailers to be tortured, until he should pay back all he owed.

35 “This is how my heavenly Father will treat each of you unless you forgive your brother or sister from your heart.”

The King in this story is owed a great debt. The servant that owes him this debt is unable to pay it. However, when it comes time for that debt to be payed, the king chooses instead to take pity on the man and cancel the debt. Anything the man owed the king is now forgiven. You would think that this would make the servant want to perhaps show a similar kindness to others which is why when the servant finds another servant that owes him a much, much smaller amount of money than he owed the king and instead of forgiving him has him thrown in jail, we can understand why he then deserves to be punished. The right thing for him to do would have been to forgive the other servant. We can all see this as the truth.

Yet, we are that ungrateful servant. We know that through Jesus death on the cross that our sins, like that man’s debt, are no more. The wages of our sin should have been death. Yet through Jesus sacrifice on the cross we no longer have to pay that price. It is gone.

Romans 3:22 – 24 says that “This righteousness from God comes through faith in Jesus Christ to all who believe. There is no difference, for all have sinned and fall short of the glory of God, and are justified freely by his grace through the redemption that came by Christ Jesus.”

No matter what someone has done to you, in God’s eyes we are all the same. “for all have sinned and fall short of the glory of God”.

The man in the story is forgiven by the king. Surely then his response should have been to forgive the other servant that had wronged him.

In the same way. Because we are forgiven by God for our sins, our debt has been cancelled. We too must forgive others – for the way we treat others who sin against us is the way God promises to treat us when we sin against him. The more we realise our own need for forgiveness, the more we will be able to forgive our brother or sister, not just seven times, but with the infinite forgiveness that God offers us.